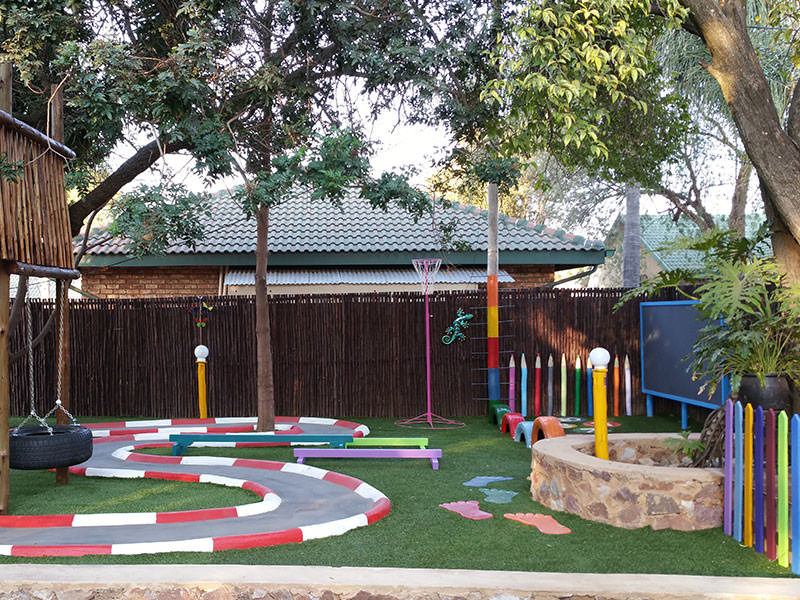 Play area – Birthday party for a one year old

A big area under old huge trees was our next challenge. We had to design a Jungle gum/ play area for a toddler that turns one year old. He is still very small but we needed to keep into consideration that he would not be so small for too long and that the area must be suitable for playing at least for the next 10 to 15 years.

We started with a race track where he could ride his plastic scooter with friends and also learn the most common road signs. The area was lifted up 500mm, a stone wall was built around the given space and the whole area was filled with gravel and river sand. The track was built and painted with red and white stripes.

A chalk board was custom made for the need of small as well as bigger children. In this specific area the objective was learning. Everything that we could incorporate to stimulate a child we tried to bring into the design. An existing telephone pole was used for a climbing pole. We drilled 12 mm steel through for climbing with painted tyres underneath. Huge pencils made out of poles were planted in the ground next to the chalk board and a hop scotch just next to it. Big cement feed painted in different colors was the walk way to the jungle gym. Colourfull beams where laid on the fake grass floor for balancing tricks in different lengths.

On their way to the jungle gym a massive tractor tyre also painted in a bright colour was made into a sand pit. We used specific play sand mixed with cinnamon to keep the cats away.

The jungle gym was constructed over the race track and into a big tree next to the swimming pool. The whole area lends itself so that we could design the tree house/jungle gym into different levels. The two levels are joined with a small three step ladder. On the first level a colourfull slide was mounted. The higher level we used for a swing/ rope. The space under the jungle gym was incorporated into an open play area with a swing made out of an old tyre and a painted rope ladder next to it. The pool and the play area were divided with a colourfull painted picked fence to keep the children away from the water. Garden lights for evening playing was also installed on yellow painted posts.

Old jam tins was colorfully painted and drilled onto the posts under the jungle gym and seedlings planted inside.

Our objective was to stimulate all senses, to make it child friendly and useable for the next 10 years of his childhood. 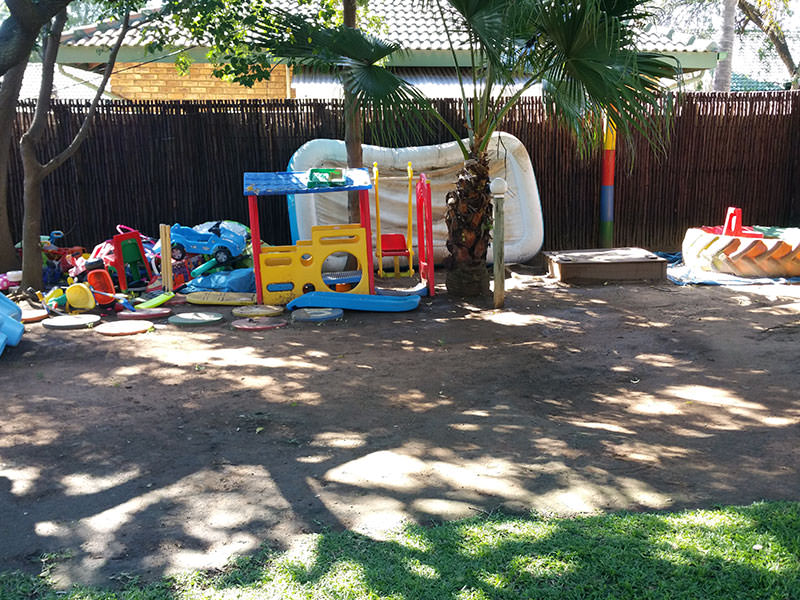 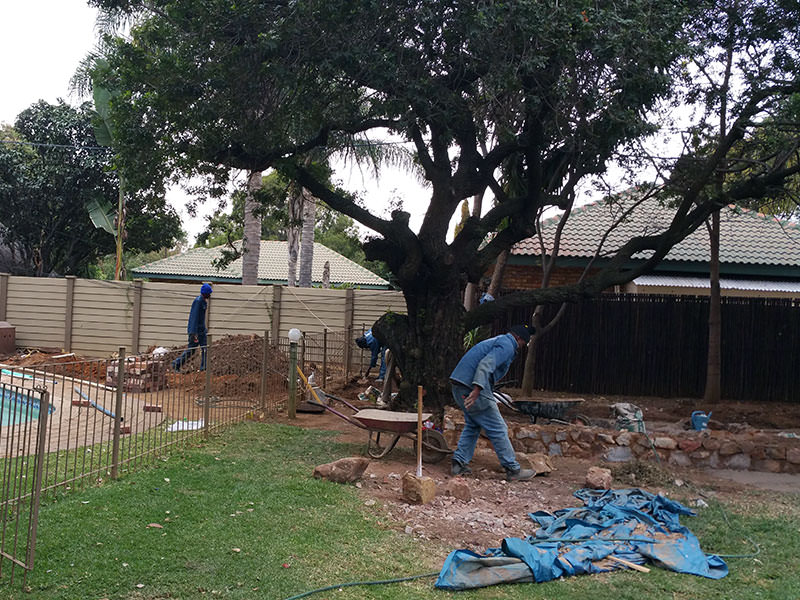 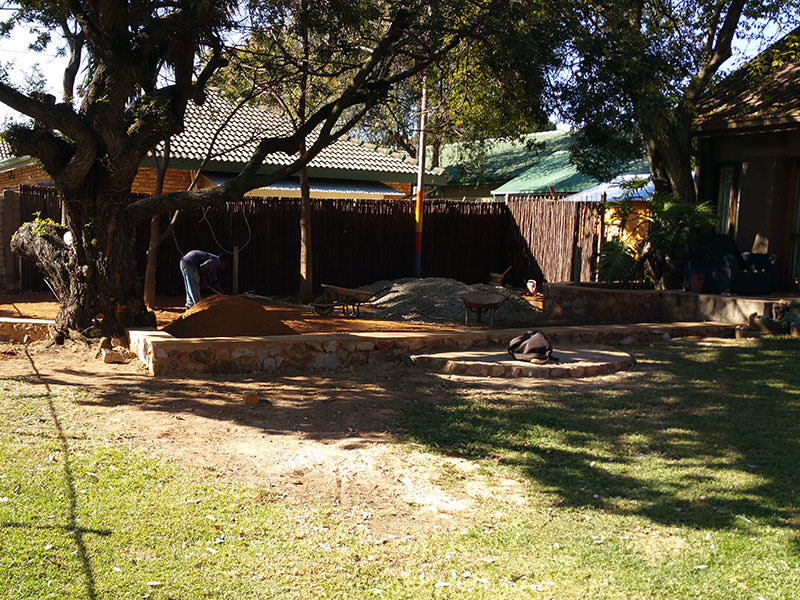 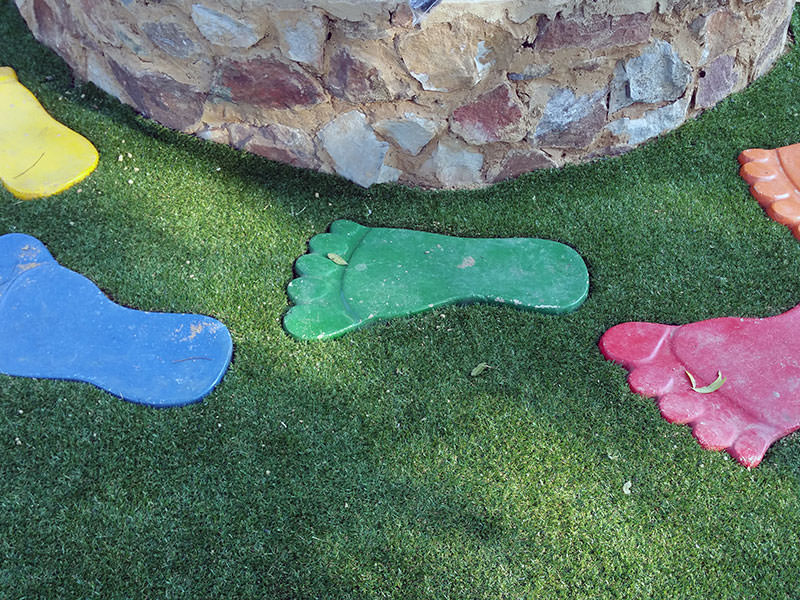 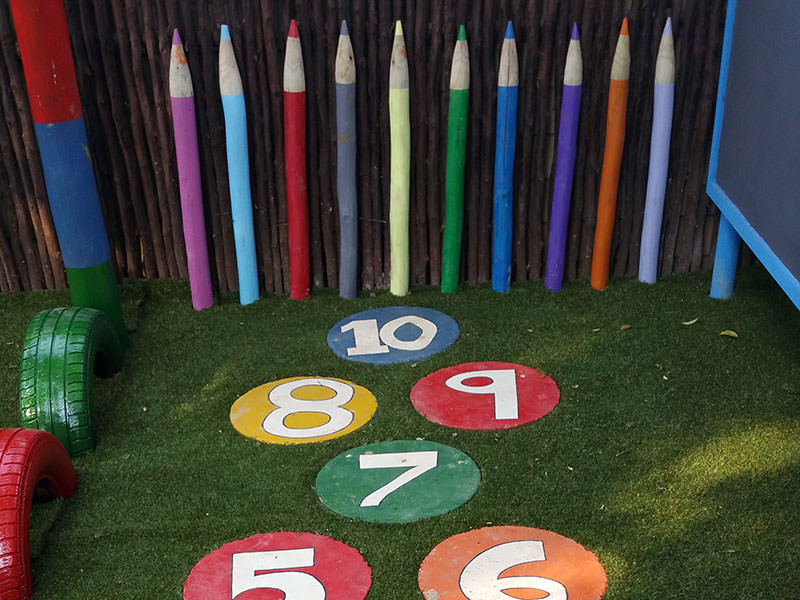 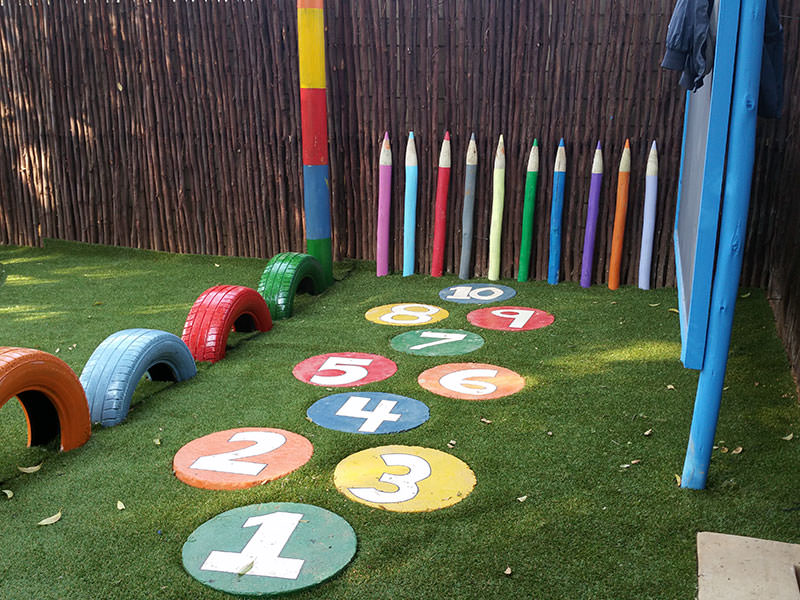 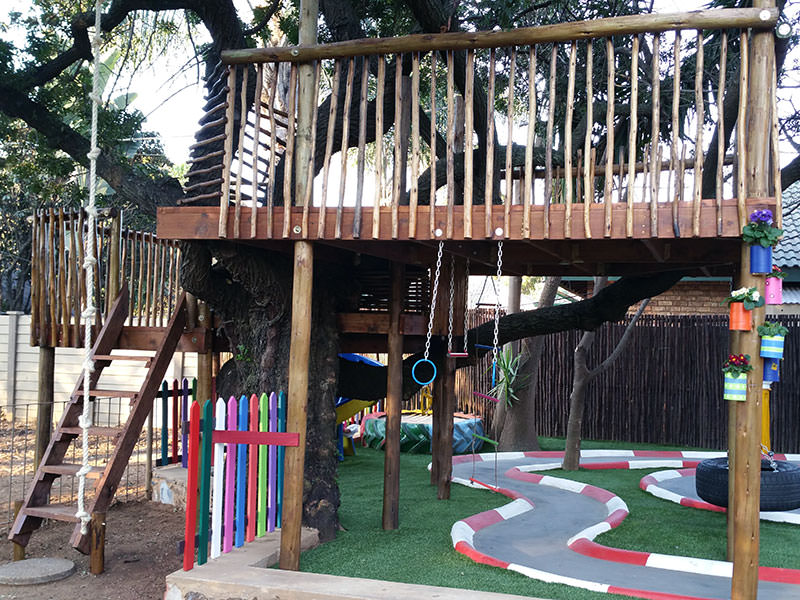 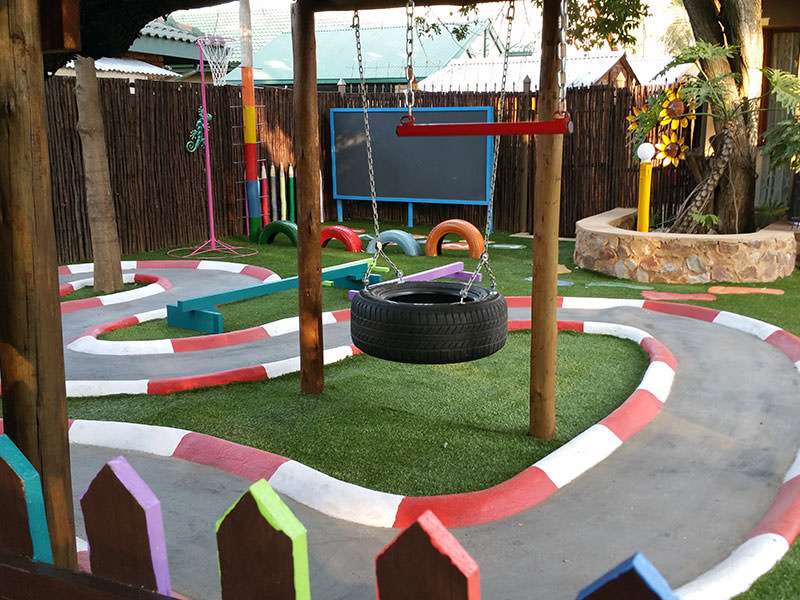 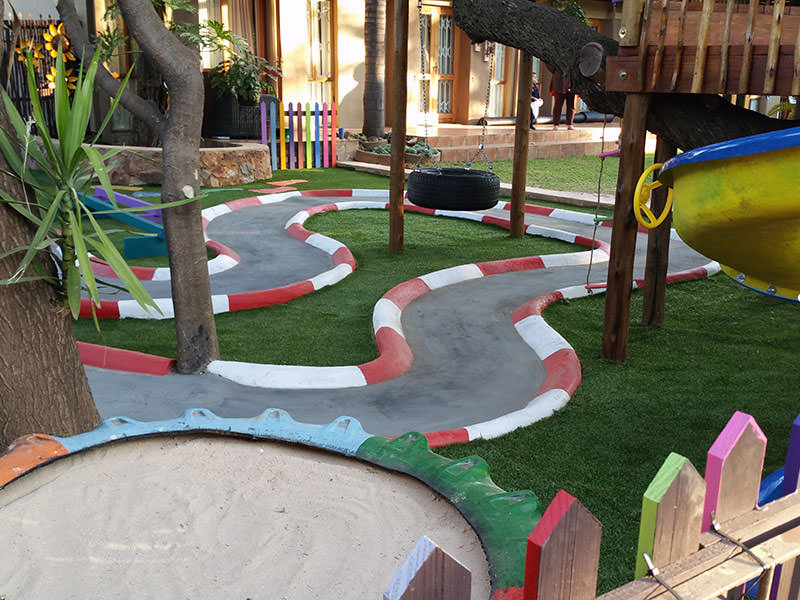 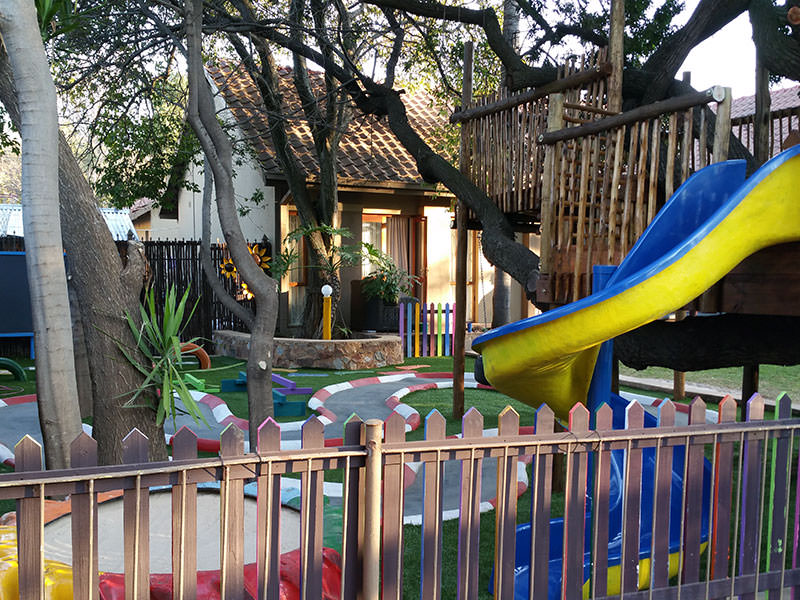 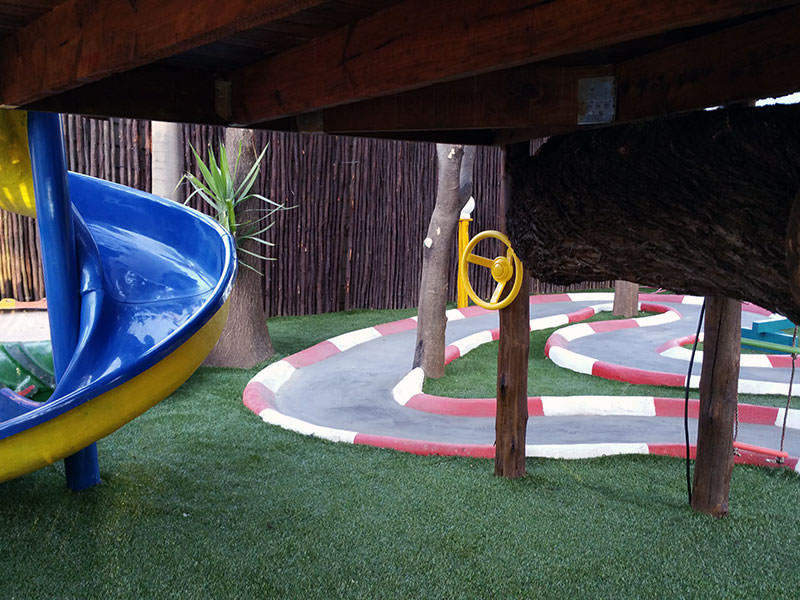 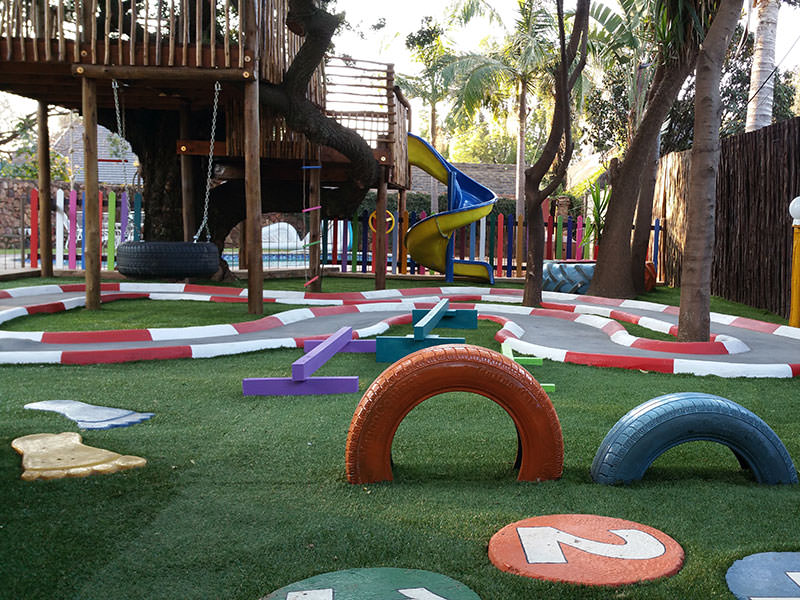 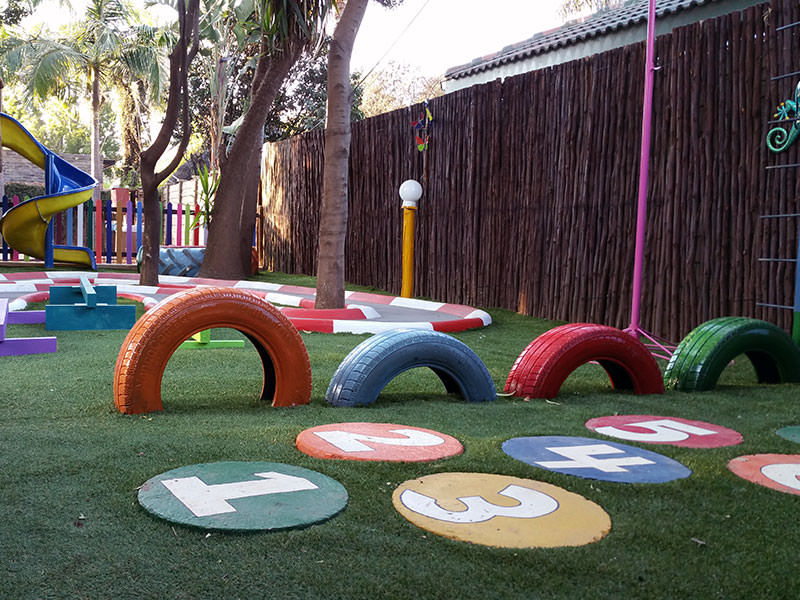 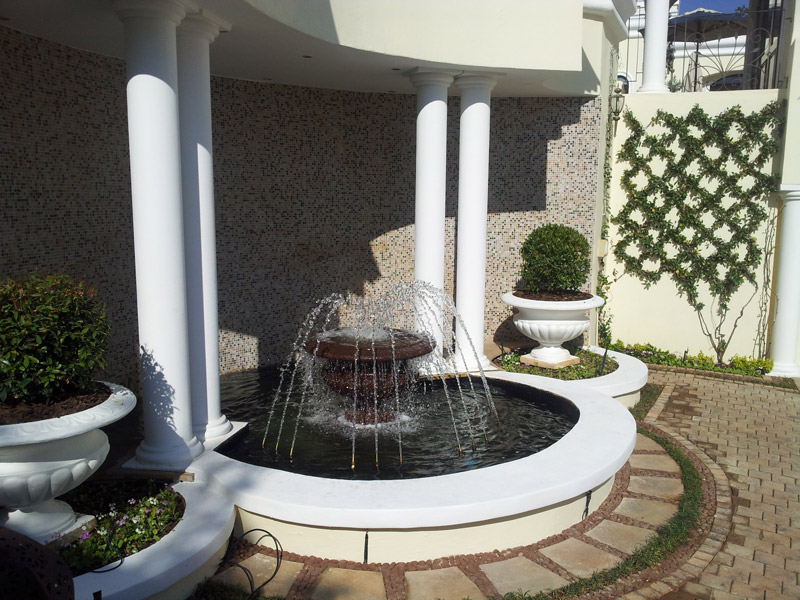 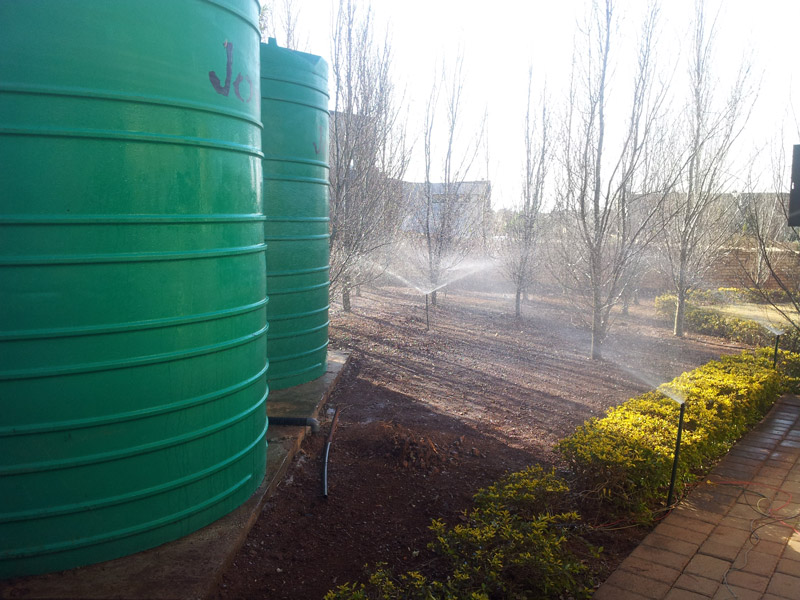 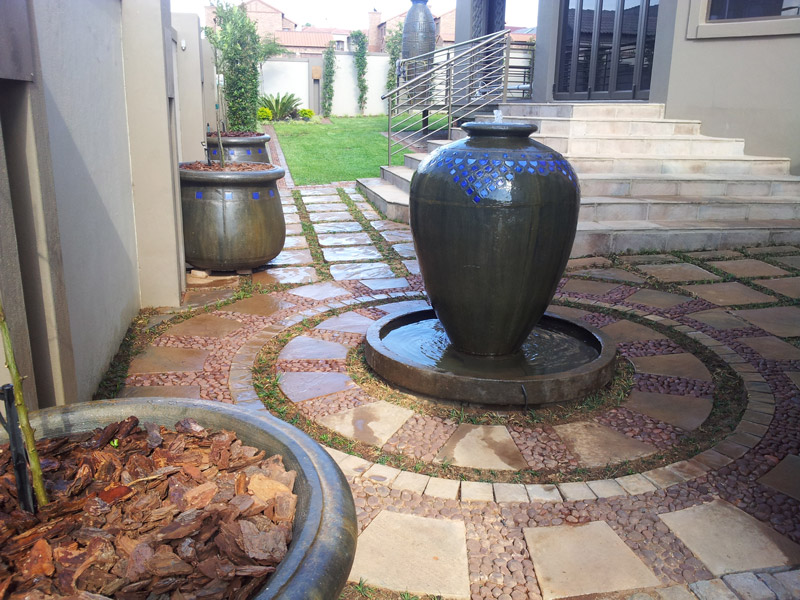